Today I ventured out of the peaceful (gated) hotel, a fake Delhi where things are orderly, constantly cleaned and quiet, and into real-life Delhi, which is chaotic, crowded, and not exactly clean.

It is difficult for me to take photos that capture this place – my camera captures only slices, and it’s Delhi’s bigness that is its true-self: big population, billions of cars, and stuff just out in the world instead of behind closed doors. People live on the narrow medians of roads, cooking, shaving, and hanging laundry on anything that will hold it.

Young barefoot kids sell stuff on the side of the road, or in the middle of the road; I imagine my kids having to do that and shudder. Traffic jams are enormous; I am reminded why I adore car-less Venice. The smog is intense; I am full of appreciation for Hawaii’s trade winds. The food is fantastic; weight will be gained.

Here are a few photos, street scenes and the Qutb Minar complex. Hope you enjoy them.

Ahhhh, 85 degrees (29.5 C), that’s more like it. I’m definitely more comfortable with this than the cold of Spain and the deep, wet chill of Ireland.

But then there’s the air “quality”; when I landed this morning, it was difficult to see much of anything beyond the airplane’s wings. One headline read: “Residents woke up to a pall of grey left behind by acrid smoke from fireworks that remained trapped in the city’s cool air.” Um, “85” cool? Anyway . . .

There’s the fantastic food. And the gorgeous women’s clothing.

But then there’s the rubbish strewn everywhere.

Much more, I’m sure, in the coming days.

After a six-hour train journey from Santiago de Compostela, I’m now at the Madrid airport, waiting to board a ten-hour red-eye to Delhi.

I spent the last two days wandering Santiago in slow motion, hoping to ease out the remaining kinks in my hips and legs.

A final act for pilgrims is to enter the cathedral and “embrace the apostle” (aka hug a silver statue of St James from the back). Not interested in that aspect of the Camino, and in no part due to the long and winding line of people waiting to do so, the idea slipped my mind. Then, with extra time before a massage appointment, I wandered inside the cathedral and found myself almost all alone in the cavernous structure. I wandered here and there, snooping in small corridors and corners until I found a narrow stone staircase going who knows where, so I clambered up it and found myself behind the apostle, in embrace position. Two men stood in the cramped alcove behind the statue, working rosaries; when I attempted a question, one put his finger to his lips and whispered, “silencio” but with a friendly face. He motioned to the statue, indicating it was mine to hug, but I declined, to his surprise, snapped a possibly forbidden photo (he’d shrugged when I pointed my camera at the statue’s broad back), and hustled down another narrow staircase, passing a chamber with a young man, most likely fresh off the Camino, on his knees, weeping. It was a long walk in a new country for me; for others, obviously, much more.

Anyway, here are some final photos of Spain. Hope you enjoy them.

Finisterre is the next and final stop for some pilgrims, about 90km/56 miles west of Santiago, so another fours days of walking or a 1.5 hour drive, which was my choice, although I did walk a couple miles up to the lighthouse.

Here are some photos for Finisterre and Muxia. Hope you enjoy them. 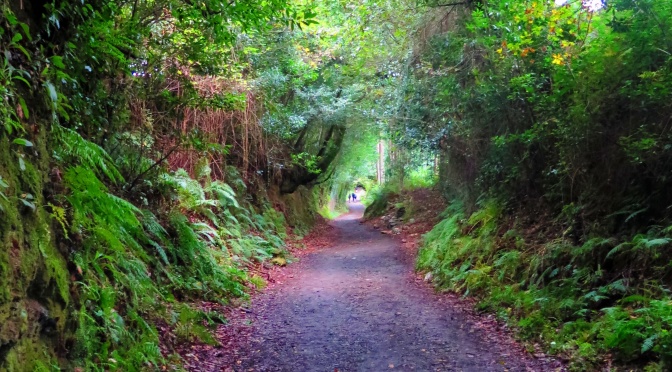 So, backtracking a little here with the inclusion of some pre-arrival photos along with a few shots of the city, including my first glimpse of the cathedral.

And I definitely want to send a loud shoutout to the tour company, Andaspain. I’ve worked with many tour companies over many decades, and these folks rock. If you are considering walking the Camino, you must consider them.

I arrived at the square in front of the Santiago de Compostela Cathedral this afternoon after setting out 15 days ago in Roncesvalles. I began the final 15 miles this morning in Amenal, brimming with anticipatory energy, jamming up over the hills, imagining the guilt I’d feel not limping in . . . and after a few hours of this lunacy, I was suddenly aware that my feet really, really hurt, my hips and back were aching, and was that a new blister on my right foot? I spent several blissful minutes with my trusty tennis ball and a convenient wall on the side of the path working out some kinks, then covered the blister with a miraculous Compeed. These helped enormously to get me through the remaining miles. And make it to the church I did, limping a respectable amount through the city and up to the square in front of the church. The excellent tour guide was waiting with a bottle of extremely tasty Spanish sparkling wine. I discovered there were tears in my eyes. It’s done.

From the morning I took my first step on the Camino, October 11, 2019, In Roncesvalles, I have walked 169.31 miles and climbed the equivalent of 1,761 flights of stairs. There’s a trip tomorrow to Finisterre with more walking, but those numbers are my official Camino tally.

They say pilgrims arrive changed or more knowledgeable. I’m not a pilgrim, but I now know with certainty it was wise for me not to attempt the entire French Way Camino. I also know that if I just keep putting one foot in front of the other, some pains go away. I know that I am stronger than when I started – my calves have an impressive curve to them.

I’ll write another post about the last day’s walk. This is just the “I made it” one.

The bad news: today’s weather was “steady downpour followed by steady downpour.” The good news: my feet, calves, and knees were grateful that the length of hike was cut short. More bad news: I bet there was some pretty countryside, but I saw little of it during the four hours I hiked, what with the hood of my raincoats (yes, plural raincoats) hanging down and my glasses fogged and rain-streaked. More good news: this hotel has the radiators turned on during the day, so my rain gear, boots, and backpack are now dry.

I signed up for this trip because I wanted to explore Spain and because I love walking when I travel. I’d looked for other Spanish walking routes and tours, but settled on this tour mainly because the company had a good rep for supporting vegans; it just so happens that they are Camino addicts. As are pretty much everyone I am walking alongside. I met one woman who started her pilgrimage on September 1 (today is October 24); she has walked the entire way. She sleeps in the dorm-like pilgrim hostels, smelling everyone’s wet socks and listening the snores and farts; I stay in nice hotels, with private bathrooms. She enters every church along the way; I mostly take photos of the exteriors. She walks out of her hostels in the morning and into to the next open hostel she finds; I am shuttled to select starting places; met after a few hours with refreshments; treated to lunches and dinners; and then driven back to said hotels. She carries all her stuff on her back; mine rides in a shiny new chauffeured van. She walks in the rain; I jump in that van to get out of the rain. Her stuff stays wet; mine sure doesn’t. She has walked the entire route; I sure have not.

Tomorrow I arrive at the culmination of all the Camino paths: Santiago de Compostela Cathedral. There is a place an hour out from it called Monte del Gozo, the Hill of Joy, because it’s where one first spots the cathedral, and pilgrims are said to cry out in rapture at the sight.

I am an imposter walking among them.

P.S. I’m caught up with my posts for now.

Oh, the things I learned today: sharp darts of pain can spring from places on my foot I’ve never felt before; I can get a blister between toes; knees can hurt like hell, and then suddenly feel fine; all discomfort disappears when suddenly discovering a bagpiper in a dense, dark forest; and lastly, hiking 19 miles and climbing 143 flights of stairs might be my limit.

Thank goodness the weather was bright and clear for those 19 miles and 143 flights. Also that the hotel has rooms with large bathtubs, plenty of hot water, and delightful (and strong) gin and tonics made with flashy local gin.

This morning at 9:30 when I began my walk it was 33 degrees Fahrenheit (1 degree Celsius), although it must have been colder in the night for there was ice on car windshields. It was also foggy and the sun was not yet risen. At 9:30! Jeez Louise.

The walk began through a misty forest known for spooky legends, so the foggy weather was perfect. However, after a couple of hours hiking up out of the valley, the sky revealed clear and bright, and it warmed up nicely, although I would never say I was actually warm. Total distance walked: about 16 miles, and up the equivalent of 407 flights of stairs. Fitbit awarded me a badge for this achievement, and my calves are recognizing it as well.

I continued to pass through spectacular rural countryside and visited the remains of a Celtic village which was awesome, in the true sense of the word.

It’s harvest time, and fields are full of pumpkins and dark greens. Smoke wafts from chimneys. People are collecting mushrooms and chestnuts. It’s a great time to be here in the Spanish countryside. That is, when it’s not raining.

Here are lots of photos. Hope you enjoy them.

Aha, yea, at last: it did not rain for today’s 15 mile walk. There were actually a few moments of sun and warmth. What a treat.

I’m now in the part of Spain called Galicia, nicknamed Spanish Ireland, for its similar weather and countryside and also for a shared Celtic past. I’m gonna call it Gorgeous Galicia after what I saw today.

That said, I’m also in the last 100 kilometers before the Camino finish line of Santiago. One must walk at least this much to qualify for a certificate, so it’s very popular. Up until today I could walk for hours without seeing another person, but today, not so much. And because these folks are just starting their short walk, they are very energetic and positively talkative. Plus the school groups. Plus the tour buses. Things have definitely changed.

Here are some photos. Hope you enjoy them.

P.S. Playing catch-up with posts due to lack of internet. Plus exhaustion.

Live all you can. It's a mistake not to.